The CO2 measuring device can now measure and display Carbon dioxide levels in its surroundings. In this chapter we add more interactivity: The device not only displays values, but also classifies the amount and acts accordingly: We define a normal level, a warning level, and an upper limit for carbon dioxide in the air. All levels are indicated by the LED, the upper limit will also have an acoustic warning from the buzzer.

The buzzer has two legs, one goes into ground, the other into a pin. When having several devices connected to the board, make sure they are all connected to the same ground. The pins have been changed in this diagram so that the cables don't cross. You can stick with your old pin layout. 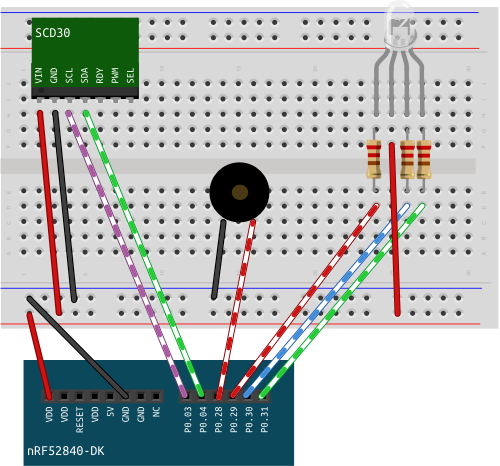 The buzzer works in a straightforward way: It is connected to a pin and ground. Any form of voltage change lets the buzzer buzz. The lower the frequency of this change, the lower the tone of the buzz.

✅ Create a module for the buzzer. Create a type with the following methods: * init: takes a pin and puts it into push pull output mode with the initial level low. * high: puts the pin high. * low: puts the pin low. * buzz: set the pin low and and high with a break of one millisecond between each switch. Experiment with different break lengths.

✅ When initializing the sensor in fn main(), let the buzzer buzz for 500 ms, to test that it works.

For over 150 years, carbon dioxide concentration has been seen as an indicator for the quality of indoor air. Carbon dioxide levels rise with human presence in rooms and with it the concentration of other emissions of humans (microorganisms and other gasses) rise and cause a decline in air quality. Carbon dioxide is not only an easy measurable equivalent, the gas itself has significant influence on cognition and at higher levels on your health. There are different regulations regarding air quality: DIN 13779 which regulates automated ventilation considers values below 800 ppm as indicative of highest air quality, values between 800 ppm and 1000 ppm as medium quality, values between 1000 ppm and 1400 ppm as mediocre quality and values above 1400 ppm as low quality. The 150 year old Pettenkofer number which regards values above 1000 ppm as bad quality is regarded outdated for the reasoning behind it, but it's still a useful number. Current recommendations regard values below 1000 ppm as quite safe, values between 1000 ppm and 2000 ppm as noticeable and values above 2000 ppm as unhygienic. For reducing the chance of catching the corona virus, it is highly recommended to keep the value below 1000 ppm.

✅ Create a new module for CO2 alert. It contains the following:

Accessing other modules in a module:

Make the following experiment: If your carbon dioxide sensor detects concentrations above 2000 ppm and you open the window, how long does it take until the concentration is back to baseline at between 400 and 500 ppm?

It probably takes longer than you expect. Leaving the buzzer on for the entire time is annoying and will not serve the purpose, as people will just turn it off completely. Having not only a visual but also an acoustic signal, when baseline is reached makes sense, as leaving the window open for an extended period of time in winter is a waste of energy. This is where we have a lot of freedom for design.

✅ Come up with your own signal scheme. What are the events that can come up? How would you like to be notified of them?

Here are some ideas: