On a high level, the driver we will write will be able to send different commands in form of bytes to the sensor. Depending on the command, the sensor will start or end a process or return data. The SCD30 can use three different protocols, we'll use I2C.

An example of this implementation can be found here: 10_scd_30_log_v.rs. 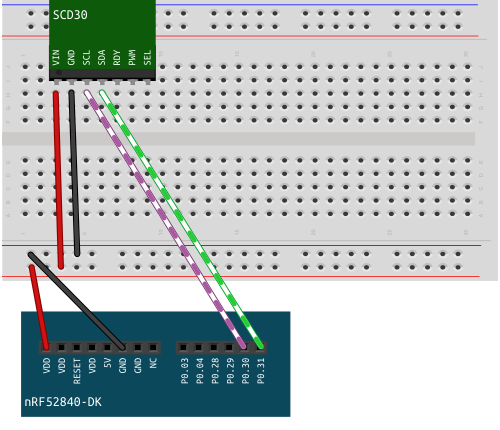 In your program, have access to the following resources:

Setting up the I2C resource

The resource we use is called twim. Twim and I2C are identical protocols, the difference is that the latter is trademarked, the former is not.

✅ Bring the following modules into scope:

✅ In fn main() configure 2 pins as floating, one for the data signal (SDA) and one for the clock signal (SCL).

✅ Instantiate the pins as twim::Pins:

✅ Create a Twim instance. The method takes three arguments: TWIM peripheral, the pins and a frequency:

✅ Add a blinking loop at the end of the program. This is a way of creating a visual output, that your program is running.

✅ Run the program. You should see a blinking LED.

We built the I2C instance, it needs to be connected to the sensor's interface. For this, we need the sensor's address.

✅ Find the sensor's address in the Interface Description and add it as global variable DEFAULT_ADDRESS above fn main().

✅ Create a module scd30 for the sensor. Inside src/scd30/mod.rs create an anonymous struct as type alias for Twim<T>.

✅ Inside the impl block, create a static method that returns an instance of the SCD30.

Next, we'll create a method that can be used on a sensor instance. The purpose of the method is to write a command to the sensor that will allow us to read the sensor's firmware version number. In order to be able to do this, we need to find some information in the sensor's Interface Description:

✅ Find the I2C command for reading the firmware version.

✅ Find the message sequence that actually needs to be written to the sensor.

✅ Find the message that is read from the sensor. How long is the actual information content in bytes?

✅ Calculate the Version number from the hexadecimal byte representation from the example.

We'll go over this method in detail, because all other methods are just variations of this theme.

✅ Add the method to the SCD30 impl block.

The method takes a mutable reference to self and returns a Result type, with an Error variant and an ok variant containing an array of two unsigned 8 bit integers.

In the first line of the function body, we create an array of two u8 containing the command that is sent to the sensor. Next, we create an empty read buffer that contains two zeroed u8, because we only need the first two bytes of the bytes that are returned. We can omit the CRC byte.

The last operation is converting the returned bytes into decimal numbers, and returning them as array.

✅ Go to your program file and bring the scd30 module into scope.

✅ In fn main()call the method on the sensor instance, and log the sensor's firmware version.

Run your program. You should get a version number as log output while the LED blinks.

Congratulations! You have written the first part of a hardware driver!